As a result of the Great East Japan Earthquake and Tsunami, more than 300,000 people lost their habitual hometowns. These coastal people now mostly live in temporary container housing built for them by the government  at the edge of towns and villages in the hilly interior of the country. However, little is done to socially integrate these displaced people into the culturally different rice-farming communities of the interior regions of northeastern Japan.

Tsukidate Community Space in Kesennuma, Miyagi Prefecture, has been built by SWTJ in cooperation with locals, evacuees and other volunteers to provide a space that links the old (farming) and new (coastal evacuee) communities at the border of the disaster area in Yasse, Kesennuma.

During our June activity week, the carpentry work was nearly completed!


The space was built in collaboration with the 'Yasse Mori no Gakko,' a Kesennuma Nature Education School and Green Tourism promoter, and with the help of a large number of volunteers and locals, either from the nearby hamlets, or from the temporary housing. 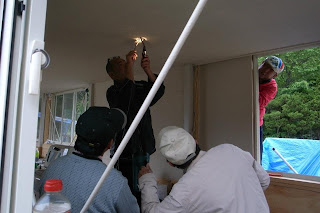 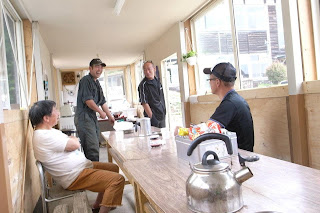 ﻿﻿﻿﻿﻿﻿Tsukidate Community Space in the morning: Evacuees, local farmers and others who pass by enjoy a cup of coffee and a chat- a great way for the evacuee newcomers to mingle and network with the old community.
﻿﻿
﻿
﻿

Why a community space?

By the summer 2011, the government had built  temporary container housing for most evacuees.

Until then, most of the evacuees had spent three or four months sleeping on mats in schools or gyms, often more than a hundred in one room. During that time (April to July 2011), SWTJ had organized warm meals for the evacuee community and built up a network of contacts so that support for evacuees could continue once  these evacuation centers would be closed.

﻿﻿﻿When evacuees were finally allowed to move into temporary housing in the summer, they were exhausted. First they were glad to finally have some privacy, but many soon realized that the new freedom meant loneliness, boredom or helplessness. Bereaved of family, job, friends and hometown, it was hard to remain positive. Depression, chronic disease, alcoholism and other stress symptoms became common. Children had to somehow cope with the stress of their parents while themselves dealing with the loss of parents, relatives or friends, and trying to adjust to an unfamiliar environment.

In many cases, the container housing lacks an atmosphere in which residents can positively build a new community. Without someone taking the initiative, these housing complexes (often in the middle of nowhere) remain anonymous. In some container complexes, leaders have appeared who organize gatherings and try to create a community spirit. In others, NGOs and other organizations have helped adding community spaces, benches, flowers, or gardens that foster a sense of community.

SWTJ took the initiative to build a community space right next to temporary housing in Tsukidate, Yasse which houses many former fishermen who lost their jobs at the coast in the tsunami, and who have a hard time getting used to live in the hilly countryside. In the newly built Tsukidate community space, container housing residents and local farmers alike can now freely gather for a cup of tea or for a community event, or discuss how to cooperate in nature education workshops organized for children by the neighboring Nature Education School. A mini-kitchen allows people to cook and to sit down together for a meal. A bookshelf is planned, so that residents have a reason to come by and sit down with a cup of tea, browse in a book, and strike up a conversation with other users of the space.

Why in Tsukidate?
The building of the Former Tsukidate Elementary School has been used and maintained by  the 'Yasse Mori no Gakko' Nature Education and Green Tourism School  since 2006. The School produces its own slow-food buckwheat noodles, and organizes nature workshops for both children and adults. 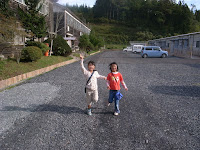 
The location between the old school and the temporary housing was ideal to build a space where the locals and the newcomer evacuees could mingle, network, and collaborate in green tourism and cultural activities.

While the Nature Education School is run by the villagers, the newly built community space is a more neutral space, where evacuee residents can take the initiative and organize gatherings of their own, or where they can invite others.
﻿ 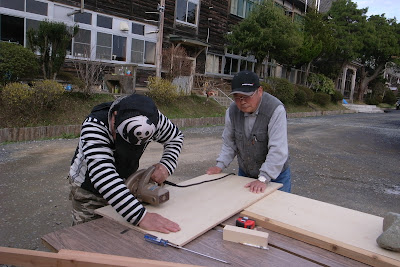 These evacuee fishermen from the destroyed coast have been very active in helping construct the Tsukidate Community Space. Building the space gave them purpose and something to look forward to in their suddenly empty lives.

The SWTJ Team was busy throughout the winter! 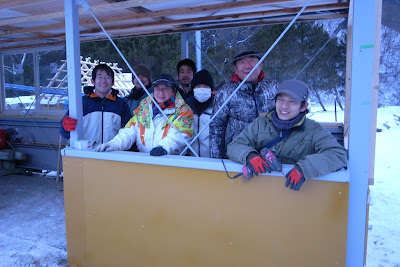 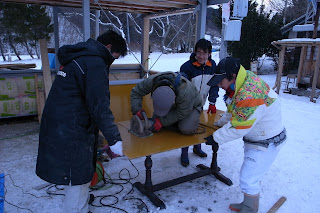 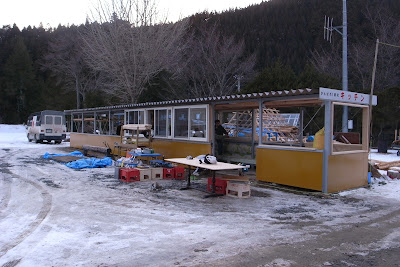 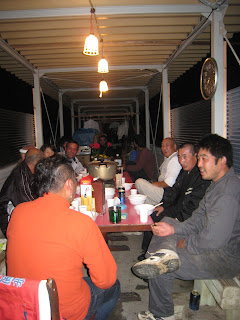 Planning for the future: 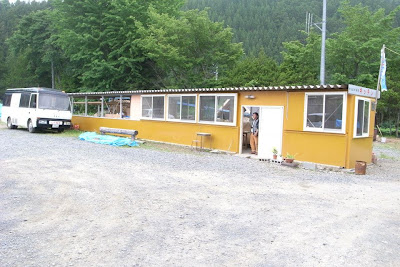 The space is built! SWTJ will continue to actively support the cultural and community-building activities taking place in the space with the aim to help integrate the displaced people into their new environment. For the summer, a kids' camp for children of the disaster area is planned in cooperation with the evacuees of the Tsukidate temporary housing and locals of the farming community. Among other workshops, some of the fishermen evacuees will teach kids how to cook seafood when on a ship with minimal comfort! Look out for news of our kids' camp  in one of the next blogs.
Find more pictures of the Tsukidate Community Space on youtube here:
http://www.youtube.com/watch?v=ow2vfLD7izM&feature=youtu.be
Text:  Beatrix Yoshikawa (SWTJ)

Email ThisBlogThis!Share to TwitterShare to FacebookShare to Pinterest
Labels: From the ground

We Won’t Forget- We Will Continue!

SWTJ is a Japan-based volunteer organization that has been established with the aim to provide long-term support to the people of northeastern Japan affected by the 2011 Great East Japan Earthquake and Tsunami.SWTJ continues today to organize community-building, cross-generation activities in close cooperation with the local population with a focus on empowerment of the elderly, the children, and the socially weak through cultural events including music workshops and children’s camps.