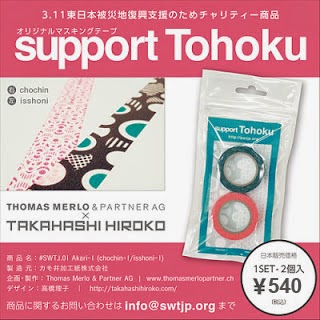 The set  [support Tohoku] contains two colorful washi  tapes beautifully designed by up-and-coming designer Hiroko Takahashi from Tokyo. Delicate decorative patterns adorn the two Japan-made adhesive rice-paper tapes, respectively named [chochin] and [isshoni], an allusion to [lanterns] lit in Tohoku in memory of the many victims of the March 11, 2011 disaster, and to the need of continued [solidarity] with the people in northeastern Japan, the region struck by one of Japan’s largest earthquakes ever.

Thomas Merlo & Partner AG distributes the product [support Tohoku] in Europe. For every set of tapes sold in Europe, one Euro is donated to SWTJ. The product was officially launched in Frankfurt, Germany, at Ambiente (Feb 15-19, 2013), one of the world's most important events for the consumer-goods sector. 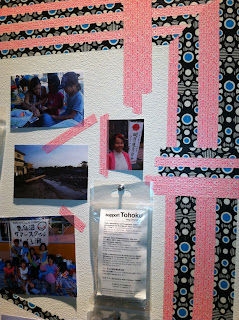 The tapes can also be bought directly from SWTJ, either at one of our events, or by contacting us at


contact@swtjp.org
(in Japanese or English).
We are waiting for your order!
All profits from sales of the product by SWTJ will be used for SWTJ's disaster relief activities.

SWTJ would like to express our sincere thanks to project initiator and producer Thomas Merlo & Partner AG, and to designer Hiroko Takahashi for supporting SWTJ with such a unique and amazing undertaking!

In addition, we thank the shops that have kindly agreed to help selling the tapes in Japan. More stores will be added over time!

*For every set of tapes bought at these stores, at least 100Yen will be donated to SWTJ.

SWTJ is committed to long-term support

Two years after the Great East Japan Earthquake and Tsunami, the novelty of the tsunami waves and nuclear meltdown has worn off in the news. Most of Japan’s regions have long returned to everyday life.

But northeastern Japan has not. Evacuees still live in cramped temporary housing scattered all over the region. Family members have to live apart from each other due to a lack of work or fears that radioactivity especially affects the very young. Worries of nuclear pollution weigh heavy over farmers and fishers. The young leave the region and the elderly are left alone. Children who stay back have few playgrounds since most of the remaining parks and sports grounds have been used for temporary housing due to a lack of flat land to rebuild. The rate of obese children has climbed to a national high in the affected regions. Stress levels are alarming. The disaster is not over.

With every set of [support Tohoku] you buy, you help us help Tohoku. Enjoy these original Japanese rice-paper  adhesive tapes in your creative life or give them as a gift!

Thank you for your support!

SWTJ (Solidarity with Tohoku, Japan) is a Kyoto-based volunteer disaster relief organization that provides long-term post-disaster support in northeastern Japan in close cooperation with its branches in Kesennuma and Rikuzentakata. SWTJ helps people in the regions affected by the Great East Japan Earthquake and Tsunami to network and to make themselves heard, and promotes community rebuilding through cultural and youth projects.

We Won’t Forget- We Will Continue!

SWTJ is a Japan-based volunteer organization that has been established with the aim to provide long-term support to the people of northeastern Japan affected by the 2011 Great East Japan Earthquake and Tsunami.SWTJ continues today to organize community-building, cross-generation activities in close cooperation with the local population with a focus on empowerment of the elderly, the children, and the socially weak through cultural events including music workshops and children’s camps.